Most folks that speak on a celibate lifestyle speak on the HIGH notes…Believe it or not there are alot of highs about it..However, there is also a GREAT deal of frustration handling the realities of celibacy..Especially someone whose been in a committed relationship or married majority of their adult life. Someone SEXY and half-arse normal and considered intelligent. Someone that looks alot like ME>> 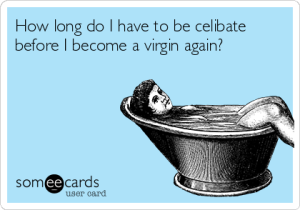 When I first chose celibacy it had little to do with my religious beliefs..It had more to do with making a conscience choice for less distraction while trying to reach a goal..I’d move cross-country and had a disciplined focus on a set amount of goals..And within a certain time frame..Adding dating to the mix would have been a MAJOR distraction..For I tend to give my all to anything I engage IN..Dating and men is certainly included..Matter of fact?

MEN = 1 of my few weaknesses…I’m not ashamed to admit I love being in love & especially love being married! On the flip side of that I’m also willing to wait (in a celibate state) for marriage before I have sex again..Now,I know most folks think certain things about celibate folks..What comes to mind is either weirdness/priests/OR a maladusted anti-sociable person..I’m NONE of the above..But I do have standards. And the longer I remain celibate; the higher my standards become. And honestly? It has become frustrating as hell!

At first? I was wearing an invisible banner waving it proudly @ I am proudly celibate , waiting and proud! 2 years later it is beginning to feel like a burden..Now it has been SO long that I wonder how much longer I can keep this UP? Not to mention I come from a highly sexed family..I’ve come to a point I don’t believe this is NORMAL..WTF was I thinking? Lawd! We are biologically created to be attracted to men and to want to have SEX..Period

The biggest downside of celibacy is the MEMORIES of how beautiful a loving relationship IS..The God created stress relieving perks that can’t be simulated. Trust me I’ve tried! There is nothing more fulfilling than a love-filled marriage..There is also nothing more aggravating than explaining to someone who doesn’t get IT that “waiting” for my The One doesn’t mean I’m pushing marriage. IF not desiring to settle for less means I’m pushing marriage; than so be it. It is not an easy walk. And definitely not for the weak hearted..But I’m standing on Faith that it is going to be well worth the wait.

2 thoughts on “>>The DOWNside of a Celibate Lifestyle>>”